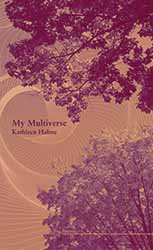 Winner of the 2014 Green Rose Prize

“My Multiverse is a contemporary ‘Metamorphosis’—a collection of finally wrought shifts and surprises. Kathleen Halme is one of those astonishing poets whose every line is a poem itself, while each poem is a universe. To read her work is to live for a while in her extraordinary sensibility, and to learn how to see more clearly and hear strange and beautiful music everywhere. Her uncannily imaginative vision is unlike anyone else’s I’ve encountered, and I can’t imagine the reader of poetry who won’t be surprised and moved and changed by these poems.”

“What is harder, asks Kathleen Halme in her remarkable, heart-rending new book, ‘joy or sorrow?’ The answers, she says, are to be found in all that is indelible, from life’s experiments to life’s necessities. Halme’s sharply shaped poems are filled with ritual and mindfulness. She wonderfully converges her private worlds with our greatest desires: grade school libraries pair up with yellow castles, daydreams carry human history, Emily Dickinson walks with Walt Whitman. These terrific poems make visible the ‘unwatched’ dance of existence where joy and sorrow finally converge in the ‘Spirit me...spirit you’ of a difficult, amazing world.”

“What a multiverse Kathleen Halme has created! The voice behind the poems is both oracular and vulnerable, mesmerizing the reader with both its rawness and its control. The wounded messenger that invites the reader into the City of Roses—where muzzled roses are more exotic than televised baboons—is clear-eyed about the dark corners of human cruelty yet still keeps the light on for poetry and the imagination. This is a book that demonstrates the range and capaciousness of the human heart and poetry itself.”

“In poems that are both intricate and expansive, Kathleen Halme’s My Multiverse takes readers from the City of Roses, with its Shanghai traps and tunnels, to a hummingbird ‘tracing the missing shape of a feeder,’ to the neural pathways of the mind itself. These poems do what all great poems do: they make the world seem strange again, shimmering with questions, ‘the mirror ball of meaning strung without a thread.’ My Multiverse is a brilliant book.”