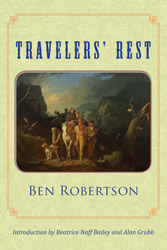 Travelers' Rest is a family epic, but it is also an American epic, carrying a message that can also be found in Ben Robertson's other, more famous works, Red Hills and Cotton and I Saw England (his first-hand account of the Battle of Britain). Thoughts of the Republic's founding and American values were very much on Robertson's mind as a journalist covering Washington and Europe as he anticipated the coming of the Second World War.