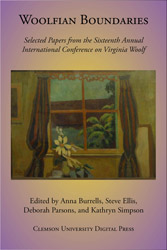 The Sixteenth Annual International Conference on Virginia Woolf was hosted by the University of Birmingham in Birmingham, England, in June 2006. The conference aimed to explore Woolf's work from perspectives "beyond the boundary" of her own positions and attitudes, taking her coolness towards the provinces and "prejudice" against the regional novel (Letters 6: 381) as the starting point for considering her writing in the light of its own "limits," self-declared and otherwise. From the approximately 140 papers delivered at the conference by delegates from eighteen countries, the editors have chosen 26 for the present volume, ranging from Woolf's connections with the "Birmingham School" of novelists in the 1930s to her interests in environmentalism, portraiture, photography, and the media, and her endlessly fascinating relationship with the writings of her contemporaries and predecessors.