Letters to the Grandchildren 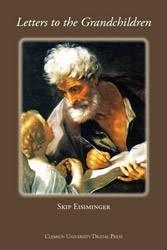 "While writing these essays, both of my parents died. When I read that Cicero had left his son a series of brief personal 'letters,' I was disappointed that my parents had not done something similar. That's when I decided to learn from the 'sin' of their omission and salt away some of my essays in a book.

"Arthur Schopenhauer said that given our 'three score and ten' allotment, a wise division would be forty years devoted to the 'text' and thirty to the 'commentary.' My division thus far has been rather less balanced--sixty-five for the text and six for the commentary, but at least I've managed to get a few things in print before shuffling off to Buffalo dragging my mortal coil. To switch the metaphor, I've spent the last six years unpeeling a very large onion. In the process, I've cut my fingers numerous times and occasionally brought tears to my eyes, but once sauteed with a little butter, the result, I think, is a palatable dish. Guten Appetit!" --Skip Eisiminger