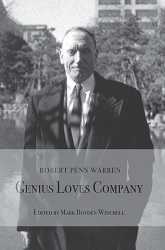 "At least since the dawn of the Romantic era, it has been assumed that the poet lives a lonely life, isolated in his garret. Nevertheless, writers are not always hermits and misanthropes. As human beings, they crave the company of other human beings; as artists they need the stimulation of other artists...Even a selective account [such as this] of Warren's most important literary associations during such a long and active life could fill a good size book."