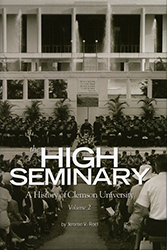 “Jerry Reel’s first volume was a masterful history of the Clemson Agricultural College of South Carolina. It ended as the ‘college era’ ended. This book begins when the modern era began, with the name change to Clemson University effective on July 1, 1964. Once again, Dr. Reel has documented the facts and shared the fascinating, personal stories that make history come alive during the decades of Clemson’s climb into the top ranks of American public universities.”