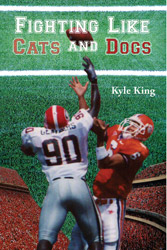 In the 1970s and '80s, there was no more closely contested or nationally significant rivalry in college football than the yearly series between the Clemson Tigers and the Georgia Bulldogs. Though geographic proximity and shared history made the two teams regular border foes from the 1890s forward, the annual gridiron affray rose to new heights beginning in 1977, the year that marked the start of a decade of hard-fought battles between perennial national championship contenders from the Classic City and Fort Hill.

Through detailed game-by-game accounts and period photographs, Fighting Like Cats and Dogs faithfully chronicles the most storied chapters in the long-running rivalry between Clemson and Georgia, from the early clashes between Vince Dooley and Charley Pell to the two teams' back-to-back national title runs in 1980 and 1981, from the game-winning field goals by Kevin Butler and David Treadwell through the present day. You will finish reading Fighting Like Cats and Dogs feeling as though you were in the stands for every game in the greatest period of this classic college football rivalry!