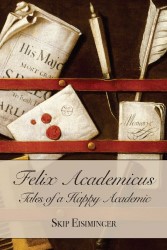 This book is a potpourri of thirty-two essays and poems written by Skip Eisiminger between the turn of the twenty-first century and mid-2006. As the enclosed works show, Eisiminger is an academic who still looks forward to Monday mornings, even after thirty-six years of teaching in Clemson University's Department of English. The collection opens with a secular-humanist essay that was written for a contest sponsored by a religious foundation. After it was completed, however, the author learned that the final judge was a fundamentalist Christian. Needless to say, it did not win, place, or show. The book closes with some speculations on immortality, one aspect of which depends heavily on this essay! In between is a wildflower garden of sacred and profane efflorescences.